A beautiful, non-touristy art gallery at the heart of the scarily touristy Oxford Street.

When a Londoner friend once told me that he would avoid Oxford Street at all cost, I remember looking at him slightly perplexed.

I was a tourist then, and while I wouldn’t describe Oxford Street as my favourite place in London, I didn’t detest it. After all, the area is practically a one-stop shop/street of every brand imaginable. Whenever I travelled to London, I could delay all my shopping until the last minute (as I do with everything else in life) and just head there to buy everything that I need and shop for souvenirs for friends.

But now that I have lived in the city for two months, I began to understand why Londoners have such negative sentiments towards Oxford Street. The place is always overcrowded, big brands seem to be haphazardly put next to each other and in between them tacky cafes try to rip you off with their substandard food – a tourist trap in short, which is why you can hardly find a single local person shopping there.

Perhaps it is some kind of a rite of passage for living in London, but I find myself disliking Oxford Street more with every visit (plus it always rained whenever I was there).

But in the midst of this chaos, there is a gem hidden just 5-minute walk away from the main street. At Manchester Square stood the Hertford House, a beautiful mansion which houses the national museum for the Wallace Collection, an art collection by the Wallace family.

The art collectors of the Wallace family consist of four Marquesses of Hertford and Sir Richard Wallace, the son of the 4th Marquess. I don’t mean this to be rude, but after visiting the museum, I concluded that art collectors are practically hoarders with a lot of money.

(I hoard things too, but I don’t have that much money. You should have seen the thrash that I accumulated when I was moving house.)

These five guys, for example, have accumulated a whole mansion of art, paintings, sculpture, china, armoury, arms and everything else you can think of that can be classified as art work. It was only when Richard Wallace had the sense to realise that their family’s collection could be a museum that he decided to work on leaving the collections to the Nation. The administrative process was so long that after he died, his widow Lady Wallace had to finish off the job and eventually made ‘the single biggest bequest of art treasures to a Nation.’

My friend and I visited the place spontaneously on a rainy Sunday afternoon, and it was quiet, a stark contrast to the bustle and elbowing at Oxford Street. It was as if I was magically transported to a different era of civilisation, to the time when women’s fashion was about covering your body with as many layers as possible and there were literal knights in shining armour. 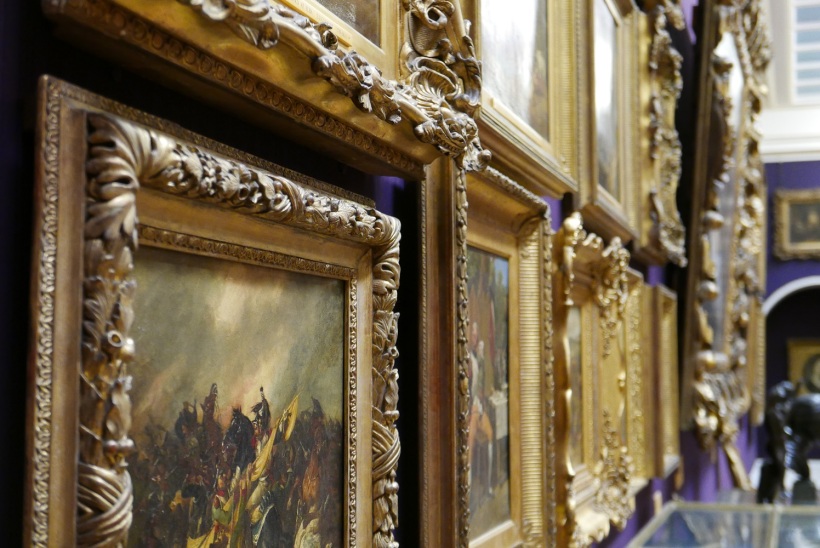 The Wallace Collection is divided into several rooms, each carefully curated with a certain colour theme and a collection from a particular era. 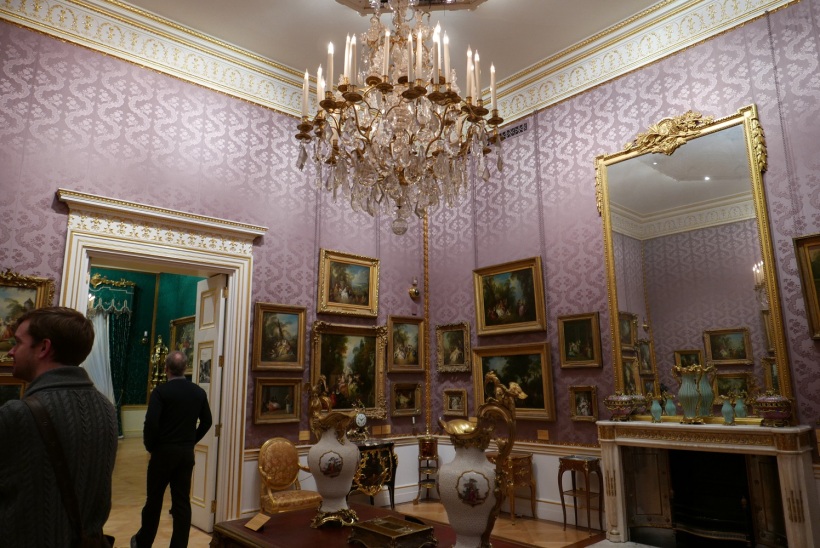 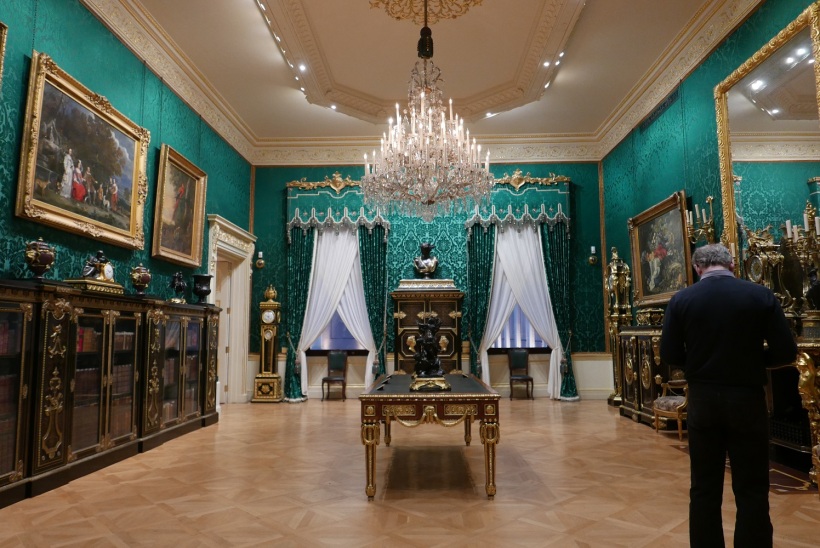 They converted the dungeon into some sort of armoury, which I’m sure the costume designers from the Game of Thrones could draw a lot of inspiration from. 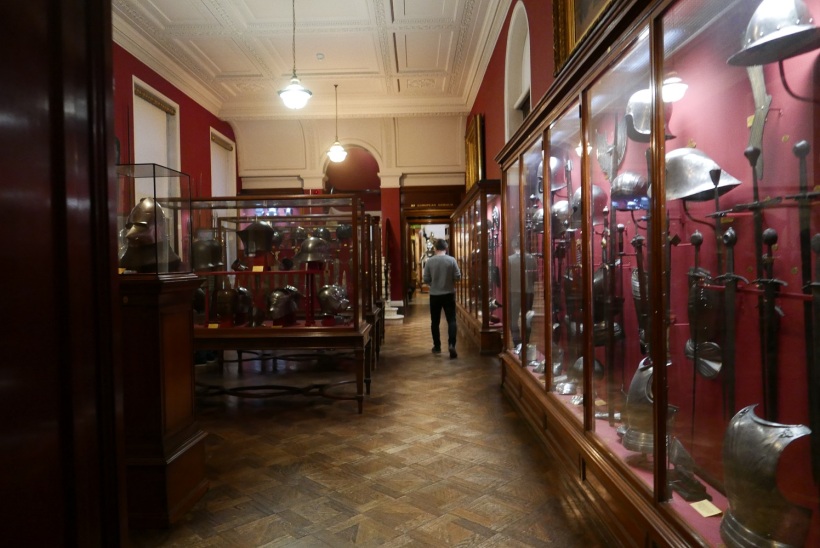 But my favourite room in the whole house was the main hall. 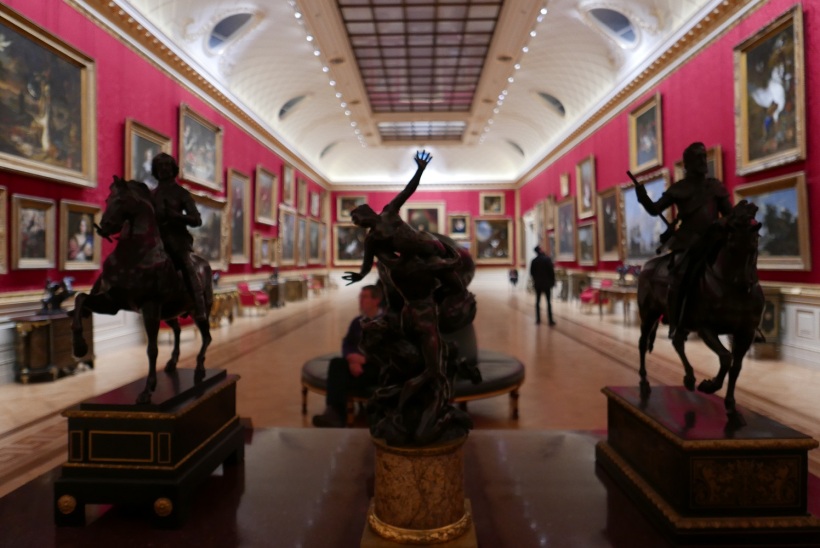 It was massive, the biggest one of the whole lot. If you look at the house from outside, you will be surprised that this hall could even fit in there after all the other pretty sizable rooms.

The hall is meant to be an amalgamation of all the other collections in the house, all the paintings hung against pink wallpaper. I fell in love with the room instantly.

This was definitely the highlight of the visit, the other rooms afterwards paled in comparison with the collection at the Main Hall.

We took about an hour to take our time walking past the different rooms while sometimes observing some of the artworks in the detail. Being the non-sophisticated person that I am, my comments ranged from “OHHH, pink is my favourite colour” to “Wow, they must like to drink tea a lot. Why would you need so many china teacups otherwise?”, that I am surprised my friend still wanted to visit other museums with me after that weekend.

I am not much of an art gallery person, but I really enjoyed my visit to the Wallace Collection. It was truly a hidden gem at the heart of Oxford Street and a beautiful reminder that even the most annoying, loud and boisterous person could somehow have, unbeknownst to many, a quiet, beautiful spot deep in the corner of his mind.

Allocate about 2 hours for the visit: one for enjoying the art gallery, the other for sipping some tea at the cafe that we didn’t get to visit since it was closing by the time we were done admiring the paintings.