Last weekend was meant to be productive. I had it all planned out so well. In order to get enough rest post Chinese New Year, I cleared out the weekend for myself, and my laptop. It was supposed to happen this way: I would have come home on Friday, cooked a healthy dinner for myself, watched a few episodes of ‘A Game of Thrones’, slept for good eight hours, exercised the next morning, written a blog post, researched about my upcoming trips, watched a few more episodes of ‘A Game of Thrones’, uploaded Myanmar pictures on Facebook and so on. Basically a very productive weekend in terms of resting, researching and writing.

But I got home on Friday evening and got as far as cooking my dinner before my plan was shattered into pieces. I tried to switch my computer on and this appeared.

I like blue in general, but when it appeared on my computer screen and was just stuck there, it was the colour of a nightmare.

And that basically rendered my whole weekend plan useless.

Instead, I spent the whole Friday night on my bed worrying about the files I had yet to back up from my laptop. And when I said files, I meant a whole folder of Myanmar photos that I had been too lazy to back up. The only thing I probably did end up achieving on Friday was getting the eight hours of sleep since I was not in the mood to do anything else.

It was a good thing I picked myself up fairly fast on Saturday. At some point in the late morning, I decided that in order to speed up the time to Monday when I finally could bring my laptop to a service centre to fix, I had to get out of my bed and do something. After spending the whole day cooking and doing house work, I felt it was time to go out and breathe some fresh air while grabbing some dinner. While I had been planning all along that I was going to Starbucks to sit and read my book, somehow on the way there, I decided since I had some time to spare, I might as well explore a bit more and see what I had been missing all this while in my neighbourhood.

True enough, I found out I did miss out on a lot of things. Just a few metres away from the mall I have been frequenting, there was a pub and another pub and a cosy looking cafe called Kitchenette with bottles of wines lined up along the walls. The cafe really appealed to me since there was no one there and I was longing for some quiet time so I decided to stop by for dinner and tea and read from my Kindle.

Since I was the only customer in the cafe, I had very special treatment and the waiter could explain to me in detail about their menu. In the end, I went for the Kitchenette breakfast set for my dinner with chamomile tea, which was priced very decently at SGD 17++ in total. 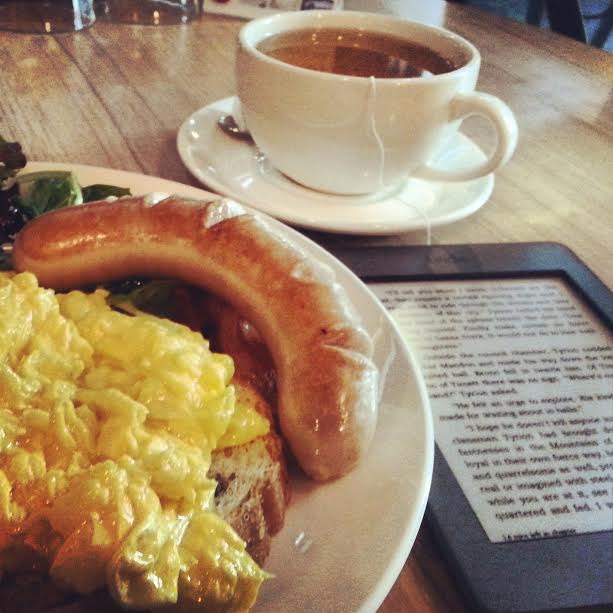 The food was tasty and comforting. The cafe had a really nice atmosphere with Italian songs playing and was certainly what I needed that night. It is really amazing what you can find just around the corner from where you live as long as you bother to explore and take a different path once in a while.

I would have stayed for much longer in the cafe if not for the Liverpool vs Arsenal match playing in the pub next door. After hearing the insufferably loud cheering from the Liverpool supporters for the fourth consecutive time, it was pretty much a sign for me to go.

All in all, it ended up to be a very lovely kind of Saturday, with a quality me-time and catching up loads on my reading. But most importantly, I discover that I can really be quite a good company to myself.

Oh, and just in case any of you are wondering what happens to my laptop in the end – it is doing fine now after bringing it to the service centre! I am now writing this post with it. All my files are intact, too, which was a really good start to my Monday! 🙂

Have a good week ahead everyone!

One thought on “A close shave.”