I rave so much about Copenhagen and London in this blog – and rightfully so, they are my two most visited cities in Europe – that you would think I love no other cities in this beautiful continent apart from those two. But there is a third city that I have visited just as many times, and adore just as much, but have not written a single post on it in this blog. 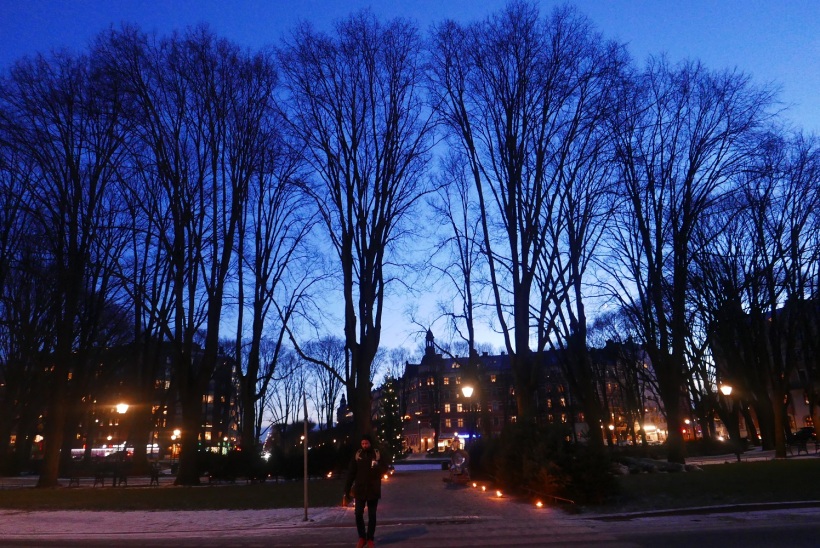 And like I said, it’s not because I dislike Stockholm in any way – in fact, the capital of Scandinavia has always been one of my favourite cities; there is nothing not to love about its beautiful architecture, the people, the culture and gorgeous waterfront views.

The reason why I’ve never written about it is because my every visit to Stockholm has always been for a very personal reason, so close to my heart that I would rather keep the stories to myself and my very close friends and families.

No – I don’t have a boyfriend in Stockholm. I have just been very fortunate to have wonderful family friends there who have always welcome me and treated me as their family. Every visit to Stockholm has always revolved around them – I stayed at their place, played with their grandchildren and eaten in their beautiful dining room and restaurants of their choice.

I also spent a considerable amount of time admiring the flowers at their rooftop.

Every visit to Stockholm thus far has been very special, but at the same time I have always known what (and who) to expect.

Until my last visit a few weeks ago. Due to some unforeseen circumstances, I wasn’t able to stay at my family friend’s place and needed to find a bed for the two nights I was there. And because Stockholm is in Scandinavia and everything in Scandinavia is expensive (and I am a poor student now), I decided to do something that I have not done in years: book a bed in a mixed dorm room in a hostel.

I can’t remember exactly when I stopped staying in hostels. I do have a little trauma ever since I was attacked by a drunk Irish guy in my dorm room who wanted to throw away my laptop – apparently he blamed me after Ireland did not qualify for the World Cup in 2006 (I clearly have that much power).

I have since stayed away from hostels or when needs must, I would stay at an all-female dorm. However, this time round, there was no other option. All the hotels were way beyond my budget, so were all the Airbnb rooms and the only thing available that was reasonably close to  Karlaplan was the hostel I ended up staying in.

But this change in sleeping arrangement was not entirely a bad thing. I was a little worried at first, especially after my friend referred to the hostel as a cellar after she saw that there was a staircase leading downstairs right at the front door. However, the ‘cellar’ turned out to be cosy and nice, and after getting over the awkwardness of sharing a room with just one other person and adjusting to limited moving space, I actually rather enjoyed it.

For one, I managed to venture away from the two stops between Karlaplan and T-Centralen. I decided walking is the best way to commute between my hostel and my friend’s place and along the way, I got to take a stroll and enjoy the pleasant Stockholm’s summer weather and had the freedom to make as many stops and detours as I wanted.

I have done most of the major attractions in Stockholm during my previous visits: Vasa Museet, the boat tour, the Gamla Stan, Skansen Open Air Museum and Ostermalm Saluhall (which is sadly closed for the next two years due to renovation).

But one rather important museum somehow missed my list: Fotografiska. Which was why I was glad when my friend suggested to visit the place since I have a new found appreciation for photography ever since I got my camera a year ago.

The museum boasted great contemporary photography exhibitions. My favourite was a collection by Finnish photographer Aapo Huhta, who won Young Nordic Photographer of the Year, along with the depiction of Hurricane Season in Louisiana by Hannah Modigh.

The breakfast at the cafe at the top floor of the museum was very enjoyable too. It was raining when we visited, but I can imagine when the sky is clear, the view from the cafe would be gorgeous.

Apparently the restaurant was meant to be excellent too, but it was closed when I visited, so I guess another reason to come back (when I have a bit more budget next time)?

Anyway, staying in a hostel meant that I was bound to meet new people as hard as I tried to avoid it. It’s been a while since I struck up a conversation with a complete stranger (apart from interviewing people while having my journalistic hat on), and I have to say, I am very much glad that I did. There is really nothing quite like finding an instant connection in a fellow traveller.

Sometimes just a little shake-up to a normal routine can put the very same city in a new light. And for me, all these reasons, along with the joy of being back in Scandinavia after my stint in the US, were what made this visit to Stockholm just that little bit more special and unforgettable.