The world is a terrible place at the moment, and most of the time I feel helpless about it.

When there is nothing that I can do about a situation, I normally turn to my good old trustworthy friend – food. During my thesis writing period where I felt mostly helpless about not panicking as much as other people thought I should, I consumed some scary amount of chocolate that could make anyone rethink their friendship with me for fear of contracting diabetes by proximity.

But now that I have no more excuse to lead a sugar-clad lifestyle, I stopped doing irrational eating and started consuming healthy stuff again. As I’m writing this, a tray of grilled courgettes are in the making in the oven, drizzled with some conservative amount of olive oil and salt plus a generous dash of black pepper and cayenne pepper.

I know, I almost can’t recognise my own reflection in the oven glass sometimes.

(Nevermind that I gobbled down a big cup of frozen yoghurt after lunch earlier today because that is COMPLETELY IRRELEVANT to this story.)

So what I’m trying to say is, because I can’t consume irresponsible food for the time being to pacify myself about the world crumbling down, I try to do the next best thing, i.e. recalling some of the delicious food that I had and writing about them. The first guilty pleasure that comes to mind is the pork belly muffin from the Muffin Man & Co. at the Primrose Hill Market.

During my second visit to the market, I vowed not to have breakfast before visiting so I could taste one or two of the stalls piled with delicious looking delicacy.

After much deliberation, I decided to start with the Muffin Man & Co., which, after reflecting upon it, was both a good decision and a mistake at the same time. The food from the stall was so satisfying that I kept coming back on subsequent visits which meant that I have hardly tried any of the other stalls.

They normally have three standard fillings: from the left, it’s salmon with spinach, then pulled duck with vegetables and finally, my favourite, the pork belly muffin. On some occasions they may have special ones too, like halloumi cheese with butternut squash mash. I have only tried two of these varieties, the pork belly and the halloumi cheese, and I am sorry not sorry to say that the pork belly wins hands down even though the other one was delicious too.

Let’s take a closer look at the ultimate muffin, shall we? 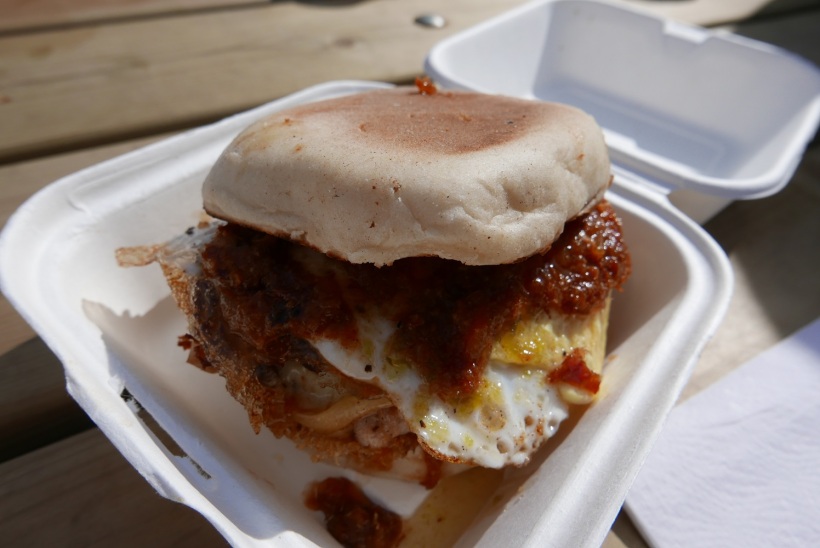 In between the innocent looking English muffins lie the following: a generous dollop of bacon jam (you can request for a mix with sweet chilli jam too if you like), a sunny side up, marvellous melted cheese, the pork belly itself and finally a sausage. Yeah you guessed that right, they are massive and very messy, not to mention artery-clogging.

This was all eloquently explained to me by the friendly seller, who was always smiling and ready to make small talks and very patient to answer all my stupid questions. 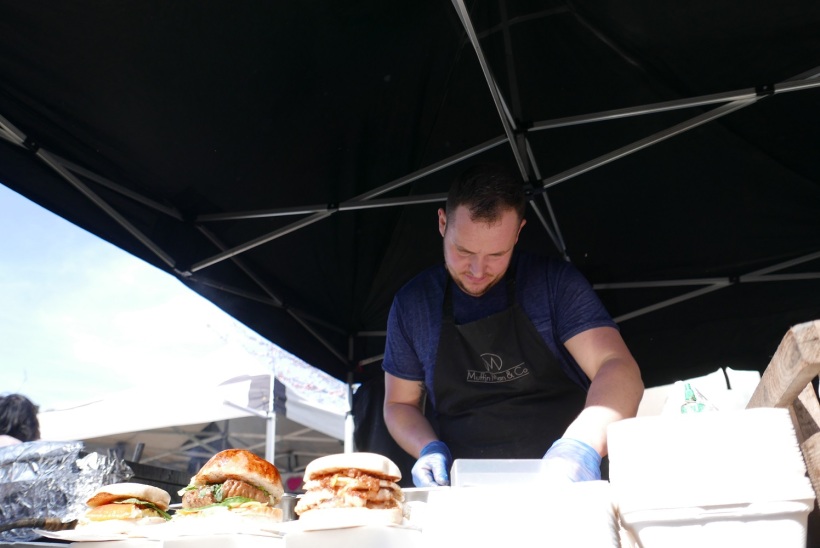 Since this is a farmer’s market stall, the muffin is not exactly cheap. The pork belly came up to 6 quid. The others, though less filling, are apparently more expensive, between 6.5 and 7 pounds. You can also request for a side of bacon hashbrown for an extra pound.

I would say they are worth the splurge if:

When I brought a friend of mine here, she loved it so much she said she would come back to London just for this (and hastily added afterwards that I would have been enough reason anyway ha). But I don’t mind losing out to this pile of fat and delight.

Apart from the Primrose Hill Market, the Muffin Man & Co. can be found in other farmer’s markets all over London such as Hampstead Market (Saturday) and Brentford Market (Sunday).