I love Singapore, particularly because of how easy it is to get from a place to another. The country is small enough that you can get from one end to another in less than two hours by the train. This feature is especially important since we only have one Saturday and one Sunday – weekends should comprise of more days in a week!

It came especially handy today when I felt like I had so many things to do and that many people to see. I had a friend to meet for brunch, two friends to meet for tea and a bunch more to meet for dinner. The amazing thing was that even with such a packed schedule in a day, I’m glad that I managed to sneak in some time to check out the Aliwal Urban Art Festival, thanks to Singapore’s small size and efficient transport system.

I wouldn’t say I understand much about art and music, but they have always sparked my curiosity. In Singapore, the art scene seems to sprawl in the underground known only by a handful and appreciated by even fewer people, which makes it even more intriguing.

Although I didn’t get to spend much time at the Arts Festival, it definitely was one of the highlights of my day. When I reached the Aliwal Arts Centre, I was greeted by the loud music of ‘I am David Sparkle’. Definitely not my staple kind of music, but it grew on me with every song they played.

I don’t even know what genre of music it belongs to, although my guess would be something departing from rock music and combined with every other imaginable musical instrument. But they certainly have some loyal followers because some even brought their kids to watch!

After the act, we went to another room to appreciate some paintings by a few local artists. These are my favourite ones.

I was thrilled that I managed to catch some drum-and-bass act before I left and even learned about this thing called the Jungle Beat. It is pretty fascinating how a 6-second drum loop from 1969 inspired a whole new music era. (Click here to watch jungle beats for dummies thanks to my friend). 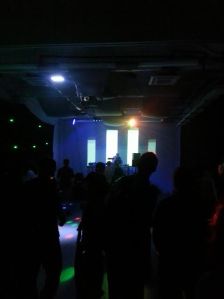 As dull as it may sound to some people, I really do believe that Singapore art scene is worth checking out! It is certainly a different side of Singapore that you don’t get to see very often.