Aaand I did it – the 50 km cycle around Singapore. Something I have dreaded and looked forward to at the same time.

Tour de Singapore has been an exhausting journey, both physically and emotionally. While the physical tiredness from having to attend weekly spinning classes in preparation was very much expected, the emotional part came as a surprise. The pressure only came in much later, closer to the race – I was growing nervous and restless, unsure about the road safety and whether I would be fit enough to complete the distance. It was amplified by the fact that one of my friends who was joining the ride with me was no longer joining. It felt like I lost a bit of emotional support. It also did not help that half of the time I was wishing I had decided to forget about this whole cycling thing and join my friend on a 3-day football charity trip to Cambodia from 14th-16th Feb. (The title of this post at one point in time was dangerously close to be “Cambodia: Of Football, Happy Pizza and Fried Tarantulas” had I chosen to go.) But I had too much of a sense of commitment in me to quit halfway as tempting as the Cambodia trip sounded.

And I’m really I happy I went through with it. It was a well-spent 5 hours of my journey and looking back at all the preparation that I had done, it was the only right thing to do, really.

(Although after hearing the exciting stories from Cambodia, I did have a sliight regret, but hey, you can’t have everything).

So read on, if you want to find out more about what happened before, during and some observations that I reflected upon completing.

As with most other crazy things I do, I signed up for this 50 km ride on an impulse. A friend asked and I said yes. I did not have a bike. I had no clue about what bikes there are: foldable, mountain bike, road bikes, single speed, fixies, etc. I did not even know how far 50 km was in bicycle terms. I just knew 10 km was too much for me to jog and row, but I could probably risk five times the distance for cycling.

Throughout the few months of preparation, we had an incredible support from the organiser. With all the spinning classes and practice rides planned for us, there was no way we would not be fit enough for the ride by 16th Feb. So being a fitness mediocre, I made it a point to diligently attend the classes and boy, they helped during the slopes on the actual day.

I also went for a few practice rides leading up to the day. The first on was organised by a friend of mine and we rode at the East Coast Park all the way to Changi Airport, Changi Beach Park and Pulau Ubin jetty. My favourite part was the stretch of road by the airport runway. I really wish I had taken a picture when an airplane took off right behind my friend against an orange sunset sky. It would have been a masterpiece. Unfortunately, since I was too busy pedalling my painfully slow foldie (while feeling very lucky the whole time that I had a friend who would wait for me while I crawled the distance), I had to settle with a halfway mark picture when we stopped for water and some snack.

The second practice ride was my first time on the road in Singapore. While on it, I really missed Copenhagen’s dedicated bike lanes where you can just cycle in peace. Here, you have to fight for your space on the road and I suspect that most people’s wishes are to knock us cyclists with their cars. It was definitely an eye-opening experience, going around some parts of the island as early as 6 am. I was surprised by how many there are in Singapore, zooming past my crawling bike with their sexy road bikes! Cyclists seem to be a friendly bunch of people – they will wish you good morning when they cycle past you. Nice courtesy.

Although my foldie was loyal enough and did not break on me during the two practice rides, I felt horrible for making people match my snail speed, so I decided to let it rest and hire a bigger-wheeled mountain bike on the day.

So after a few weeks of preparation, it was time for the real ride. Since the longest that I had done right till before the race was 38 km, I was naturally very nervous. What if the last 12 km proved to be too much? I was also very much dreading the slopes in the route since I had to push my bike uphill during my last practice. If it happened on the day itself, it would be extremely embarrassing and I would feel unaccomplished.

Much to my pleasant surprise, it turned out that with a rented mountain bike and a bigger group of people, the ride felt somewhat of a breeze. I would say ‘not challenging’ but that would be too cocky, especially considering the fact that I chose to stick with the slow group. But my biggest satisfaction was of course conquering ALL the slopes when most people had to push their bikes up. So a pat on the back to myself for that.

The main advantage of sticking with the slowest group was that I had time to snap pictures along the way. We had to stop and regroup all the time, so that gave me a few minutes to document some of the things I saw along the way. So I’m sure you are rather tired of listening (reading) to me talking already, so I will let these pictures speak of my experiences.

One last interesting observation: men cyclists shave their legs! Apparently it’s supposed to help in the aerodynamics, but it is a little bizarre to see someone with extremely hairy arms and smooth legs. Just saying.

Just to end this post, no mention of Singapore is ever complete without the city’s skyline. I shall name the below my Tour de Singapore iconic photo. 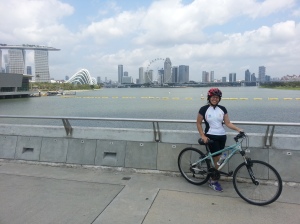 If you have the chance, try to see Singapore (or any cities, really) on two wheels. I am a huge fan.

One thought on “Singapore on two wheels.”