Jogjakarta is like a sneaky little person with a lot of tricks up its sleeve. At first glance, it could barely call itself a city. With an international airport that just about works and a city so small that it spans around 32 square km, I really did not expect much out of it save the legendary Borobudur Temple.

A closer look, however, will reveal that there is so much more to the place than a mere small town behind its time. The city may not be massive, but the province stretched far and therein lies a historic place with rich culture and lively art scene.

As is customary in most of my posts, I will start my praises of any place from its food.

Jogja’s most famous cuisine is gudeg, which is a traditional dish made of young unripe jack fruit as the main ingredient and is savoured together with white rice, chicken, hard-boiled egg, tofu/tempeh and a stew made of crispy beef skins. And as is also customary, I forgot to take a single picture of it. So here is the Wikipedia link to it.

Although not exactly traditional Jogja food, I couldn’t get enough of the home made breakfast prepared at my friend’s place. A spread of tempeh, fried noodle and fried chicken – I have forgotten how delightful it is to start the day with a heavy breakfast. Especially with a packed schedule ahead, it lasted me till about early afternoon! After all, there is nothing like a home-cooked food prepared with love. 🙂

I was also rather impressed by this French Mediterranean restaurant called Mediterranea. It has beautiful and cosy interior and served scrumptious pizzas and to-die-for feta cheese appetizer. 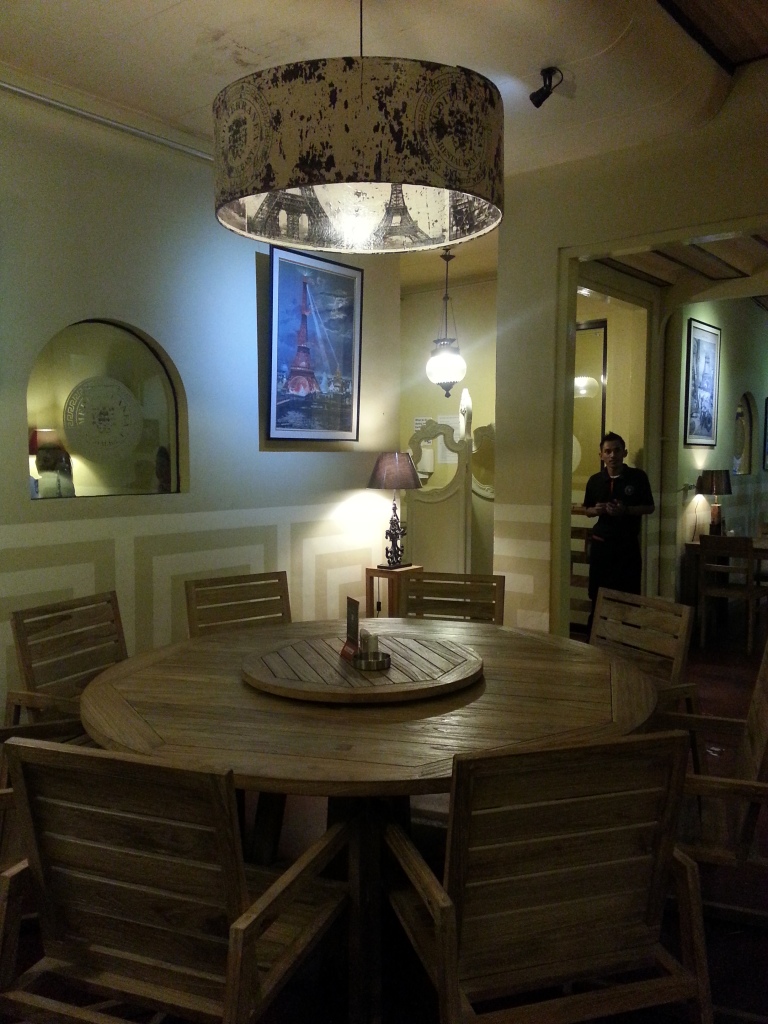 Having said that, my absolute favourite food, hands down, during my stay there was mie kakap – noodle made of snapper fish and fried with egg, vegetables and the heavenly pork cake. Proof that I loved it so much? I had it three days in a row for dinner, and I remembered to take pictures of the dish not only once, but twice!

This awesome noodle can be found at Restoran Mahkota (Tiong San), located at Malioboro Street, which is basically the shopping street of Jogjakarta.

Although the city itself does not have much sightseeing to do, there were a couple of things worth noting still. One of them is Tugu Jogja, a small monument situated at the junction between Jl Jendral Sudirman and Jl Pangeran Mangkubumi. This is apparently the most famous landmark in the city and has witnessed the development of the city through different era, from the Keraton era to the Dutch occupation up till now and survived a few violent earthquakes, one of which destroyed a third of it in 1867.

Or these neon light ‘vehicles’ parade below. You can find them at the Jogja city hall square every night for tourists to pedal around a little bit. 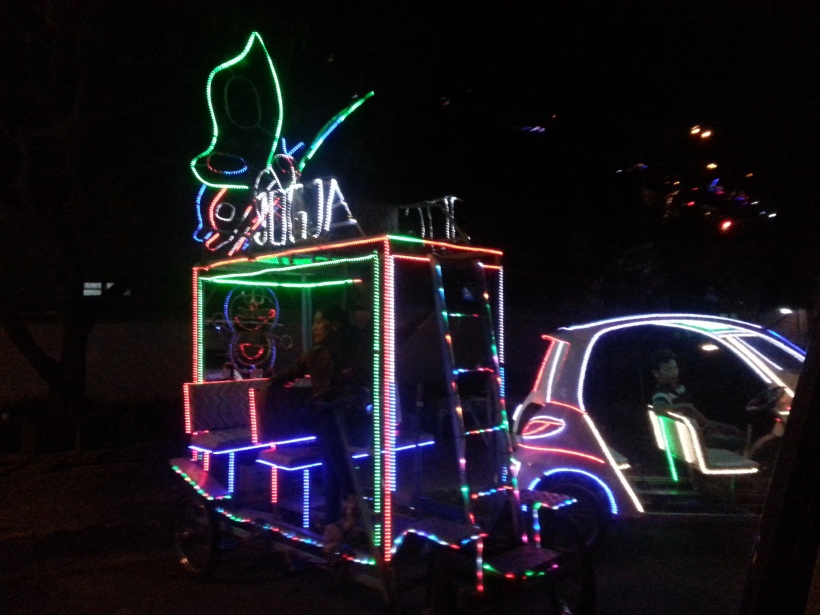 Or even some rather bizarre political campaign poster.

But that was about it within the city that I managed to see. Apart from the day when we went up to the Borobudur Temple (which would be a separate post altogether), we spent the majority of our waking moments shopping. My happiest buy? This pair of pink futsal shoes that I have been eyeing for a few months in Singapore and is on sale in Jogja!

I shall not reveal what other things I bought, just in case you would judge me. It was another surprise that we could go crazy on shopping considering Jogja only has one big mall called the Ambarukmo Plaza (Amplaz). However, the shopping scene seems to be changing fast with a few more huge malls currently under construction.

Shopping or sightseeing, nothing could beat having your own fun wherever you are. While we were in our two-hour car ride en route to Borobudur Temple, we decided to test Google’s Auto Awesome Photos capabilities and took this burst of shots. Sure enough, Google did not disappoint.

Oops, I should have warned you! HA! 😀