Parties and large gatherings generally confuse me. Anything that requires me to divide my attention between more than two people at the same time or where I’m required to make any kinds of small talks makes me nervous. This is why I normally retreat to the shadow of a bar the moment I get there, or speak to the same person whom I’m comfortable with for the next three hours and refuse to move my legs to speak to someone else across the room just in case I bump into a person that I have to make small talks with on the way there. It’s worked well for me so far and I think I have a mutual unspoken understanding with fellow party-goers whereby I normally ignore most people and they do me and that is the start of a beautiful friendship.

So it surprised me beyond words when, a week or so ago in the bar, people started approaching me to speak to me. I found out later that it was mainly driven by two things: my last blog post about the series of Murphy’s law happenings in December (thank you for all the messages, comments and concerns by the way. I did not expect it to cause quite a stir since I feel perfectly fine most of the time, but I am still very touched by it all); and the Northern Lights.

Until then, I thought that I was the only weirdo who wanted to see the Northern Lights so badly. I mean, someone even called me ‘crazy woman’ in my face for going even further north from Denmark to Norway during the winter when most others were travelling south in search for more warmth and the sun (I take being coined a crazy woman as a compliment by the way). But from my conversation with people and the reactions to my Northern Lights pictures, it turned out that a lot of people did want to see them, but I guess was the only weirdo who was crazy enough among my class mates to actually do it.

And since I seem to have reignited the sparks in some people to tick this off from their bucket list, I thought I would share some tips from my trip to Tromsø which I believe would be helpful in planning for Northern Lights trips (especially at the last minute).

Getting to Tromsø is not hard, considering it’s at the Arctic.
Tromsø is located in Norway (albeit a very northern part of it). This means that as long as you can get yourself to Oslo or other major cities in the Nordic countries, you will be able to find flight connections there, thanks to SAS and the more affordable Norwegian Airlines. I live in Aarhus, Denmark (a rather inaccessible city to say the least), and in order to get to Tromsø, I had to take a flight to Copenhagen, then to Oslo before finally landing at Tromsø. It was pretty straightforward, especially considering how far north Tromsø is and how Aarhus has the smallest international airport I have ever seen in my years of travelling.

Tromsø is an easy city to navigate and extremely beautiful.

Tromsø is a small city, and the airport is very accessible from the city centre. There is a direct public bus that takes you right to the city centre and to the biggest shopping mall in the city. The city centre is very easy to navigate (and this is coming from someone with a horrible sense of direction), and you can pretty much walk to all the main attractions.

Plus, the city is beautiful, both during the day (though the sun never rose during the three days we were there) and at night.

And if you are lucky, some random Tromsø guy would approach you and teach you how to fish while you were admiring the view.

Be prepared to spend a few nights there.
We saw the Northern Lights after our second try and people have been calling us extremely lucky. Apparently some people waited for a whole week and still did not get to see anything.

So you would have to come back the next day on a different tour and hope that all these things are aligned. I have got to be honest with you – the uncertainties can be nerve-wrecking so always be prepared for the worst!

Taking the Northern Lights tour is highly recommended.
As most things I do in my life, I do it at the last minute and without much preparation.  The naive me thought that you could simply look up at the sky from the comfort of your balcony and spot the beautiful aurora borealis. It could technically happen and it did happen to us, but it is of course not the case most of the time. It was only at the airport on my way from Oslo to Tromsø that I realised most people would have to drive out of the city for about an hour (sometimes even to the Swedish or Finnish borders) to get a glimpse of the Northern Lights. I then frantically searched for tour companies that would still be available. Good thing for me, there were a lot of tours available even at the last minute on the Tromsø tourism website. I would highly recommend taking the trips with them as it is a pretty far drive out and you would have to park in the middle of nowhere where all you could see was darkness and snow.

Prices of the tours vary greatly – some even going as much as a few thousand NOK per person! I don’t think it is necessary to spend on the really expensive tours – the basic ones would do (below NOK 1,000) if your main aim is to see the Lights. What I found most useful from them were the transport service, the hot drink and of course it would be a bonus if they provide you with special warm clothing and the tripod as well. Photo service from the trip was not necessary for me since ours turned out pretty horrendous anyway. One important note is to remember to check out their reviews on Trip Advisor and other independent websites to verify your choice of tours.

As a point of reference, the two tours that we took were:

Book your accommodation at the city centre.

I booked for an Airbnb accommodation at Hamna, which was far away from the city centre. My rationale was that since it was slightly further away from the city, we could probably see the Northern Lights from the flat (it was even advertised in our Airbnb listing). But this was probably not the wisest thing to do if you wanted to take the Northern Lights tour since most of them departed from one of the hotels in the city centre. And if you decided to stay in Hamna, coming back after the Northern Lights tour would be a major nightmare since the only bus connecting Hamna to the city centre would have stopped running by then (most tours finish after midnight). We had to pay an extra of NOK 100 per person after our first tour, which was a considerable amount since the tour itself was already pretty pricey.

I am in no way putting down Hamna though – it is a beautiful area and on the way to the city centre, you would pass by the best-looking bus stop in the city.

Plus, we did see the Northern Lights from the comfort of our flat in the end.

And we had this view right at our doorstep. 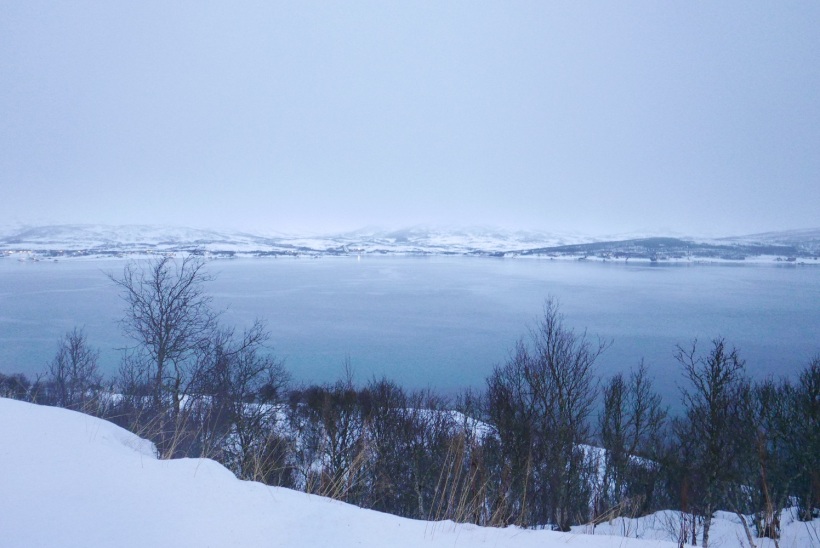 It is also close to the airport, which is a big plus. But if you have only a limited time in Tromsø, then I would strongly suggest to stay at the city centre.

Bring a tripod and a good camera.

A good camera (with manual settings) is absolutely essential to capture the Northern Lights. Don’t even think about capturing anything with your phone cameras – it is just not going to happen! And having a tripod would definitely be necessary since not all tours provided one for the participants. Since you would have to leave the shutter open for a few seconds to capture the lights and surroundings, your hands will not be stable enough to capture anything clearly.

Our first tour actually provided us with a tripod each since it was a small group of about 12 people, but we did not get to see much of the Northern Lights. On our second attempt, we went for a bigger tour bus, but as a result there were not enough tripods to go around since they only provided 2 for 40 people. In the end we improvised by using the rearview mirror of a car as a stabiliser and later on stacking our bags together, putting our camera on top and using the self timer for maximum stability. And it worked!

Well kind of, after some practice. 😉 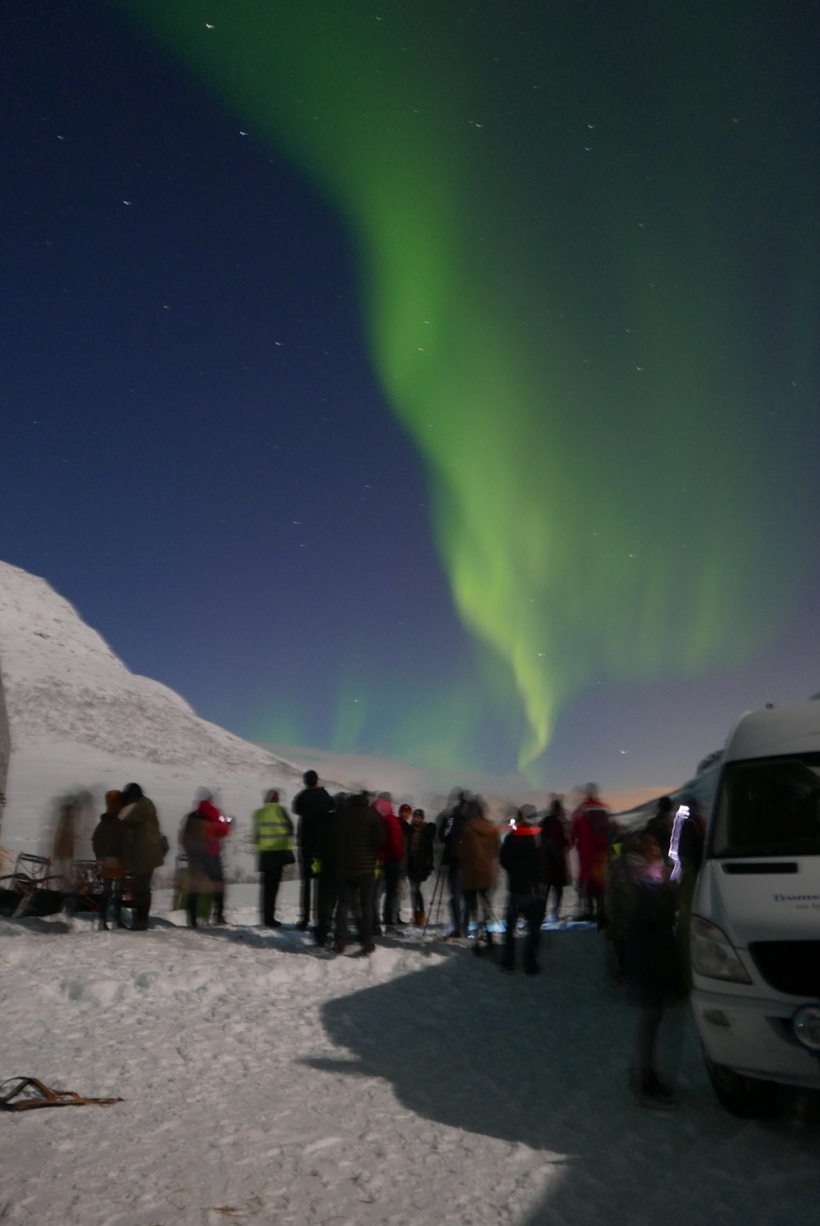 It is well worth it.

You will be cold, you will be nervous, you will be broke from the tours (we pretty much had bread and smoked salmon from the supermarket throughout our stay to save money), your fingers will hurt from snapping the pictures and you might come home empty handed. But when you do see the Lights, no words can describe how magical it feels. So I will just let the pictures do the talking. 🙂

(All of these were taken with the makeshift tripod method explained earlier). 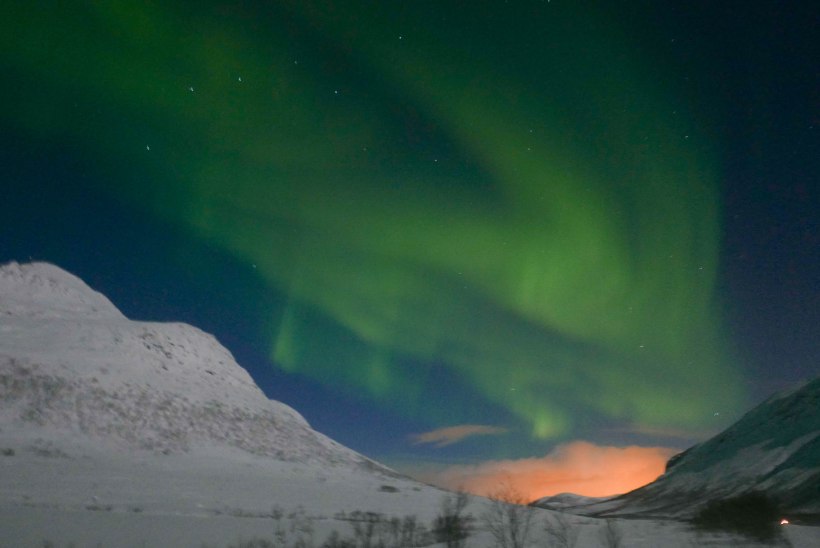 7 thoughts on “‘Chasing’ the Northern Lights.”