It is now officially 97 days (ninety seven!) since I last travelled. I did not know how I have survived without travelling for this long, but that is not to say that I have been sitting idly doing nothing. A lot has happened in the past three months, and in fact, as I have said many times previously, I have been very busy. I was leaving my previous job, and now have somewhat settled into my new one after a period of steep learning curve. Just last week, I said bye to the only steadfast in my Singapore life for the past eight years: the flat I have been staying since I first came to Singapore. It was part emotional, part stressful trying to move and throw away some eight years’ worth of junk. I can’t believe how much of a hoarder I am, but I really am one.

ANYWAY, I’m not here to discuss my habit of keeping-things-just-in-case-I-have-a-use-for-them-in-the-future. Rather, it just feels a little weird that it is December and this time last year I was getting ready to go for an epic trip to Myanmar. But here I am, in my new flat, wifi-less (I’m attempting to publish this post using Wifi hotspot from my phone plan) and travel-plan-less, and I have to say I did feel a little miserable earlier today.

Which is a bit unfair of me to say that I feel miserable to be stuck here in Singapore. It is after all a very cool place to live, and my friend just told me of a Christmas market at Gardens By the Bay which I’m going to check out next week. And to remind myself that it is not such a bad thing to be stuck here and to appreciate things around me more, I decided to write a post about one of my favourite places in this island: Geylang.

I know that Geylang isn’t a place where most people would consider their favourite. It is after all labelled the red-light district of Singapore, and it definitely does not look glamorous nor does it sparkle with the city lights that this country is so proud of. However, it is at the same time the least pretentious part of Singapore where things happen when they happen, and clearly no one seems to think there is anything wrong with a brothel and a Buddhist temple to be situated side by side.

Geylang to me is as much about the brothel scene as it is about the temples. My friend and I had planned to explore Geylang and its nook and crook since a while ago and we finally got to do it a year after. The first place we visited was a giant temple, which to be honest seemed a little out of place in the whole scene, not because it is a place of worship at the edge of the red light district, but rather because it was so modern.

Right next to it, a Hindu temple. Religious harmony at its best. 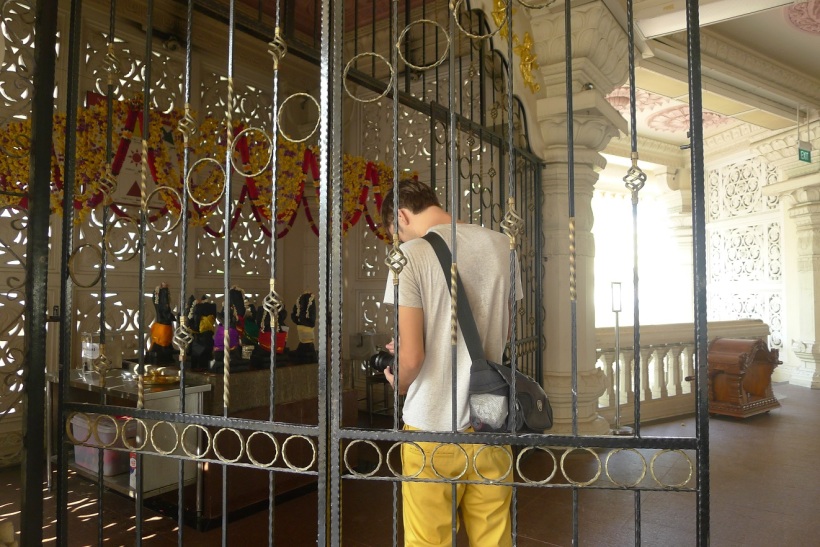 Another cluster of things that can be found in Geylang are the clan houses and Buddhist societies occupying the pretty shop houses with interesting exterior design.

Speaking of exterior design, check out how the oldest house in Geylang looks like. 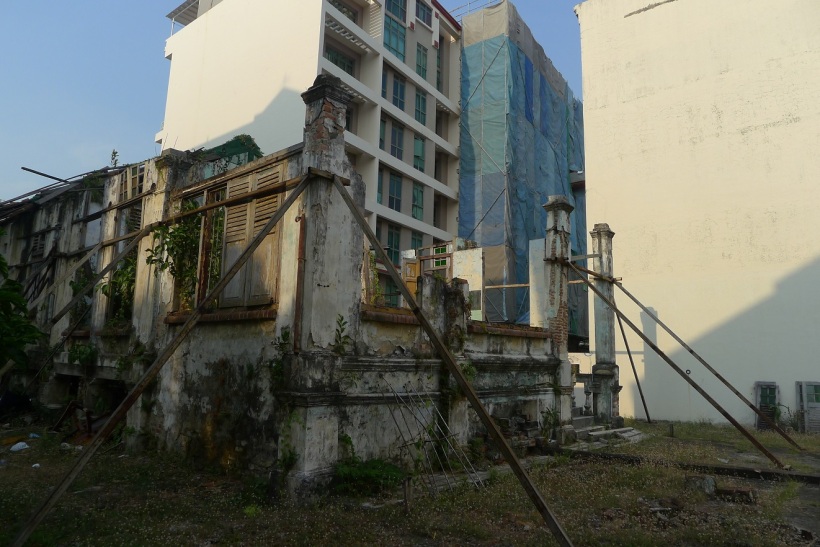 Or the oldest shop in the area. 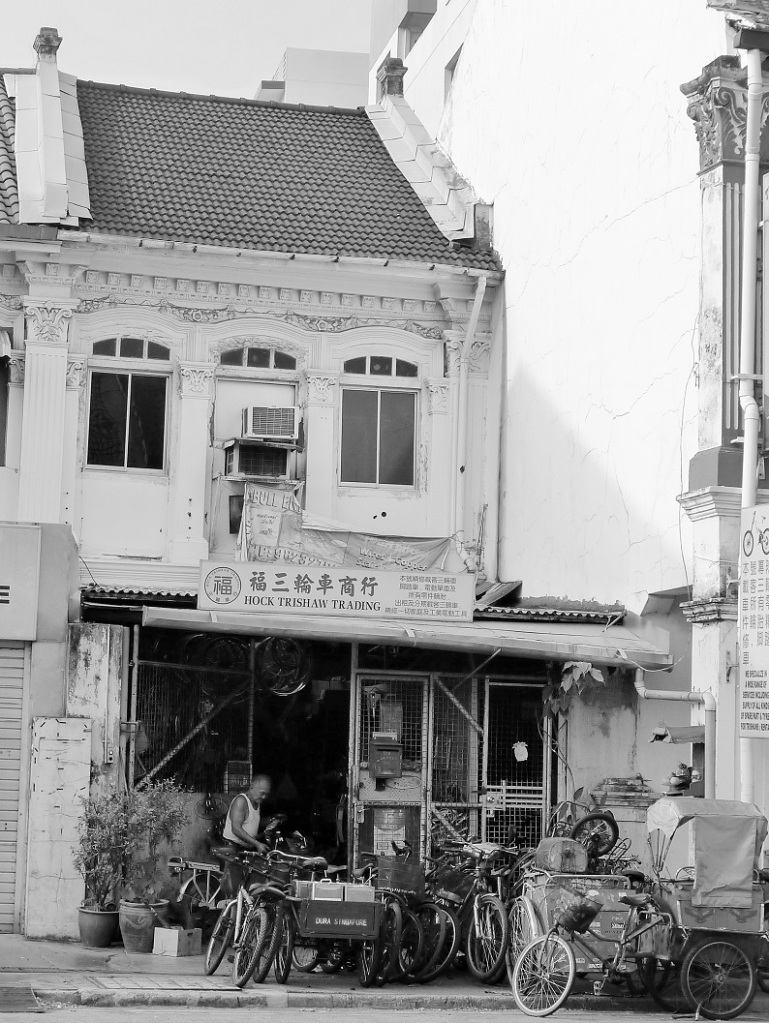 Geylang is so random that I can’t find ways to make this post flow very smoothly. There were so many utterly random sights that I want to show, like this scene of people trying to get into this bus as if their lives depend on it. 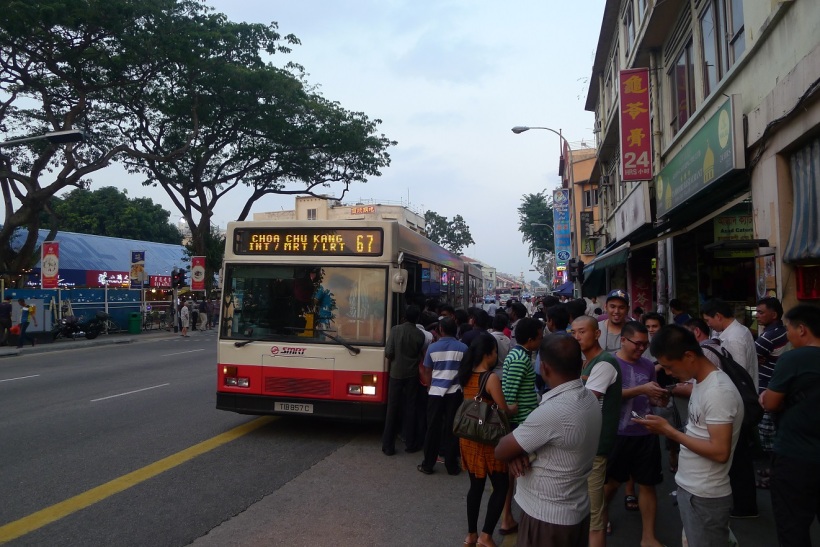 Or this roof decoration at a house-temple. 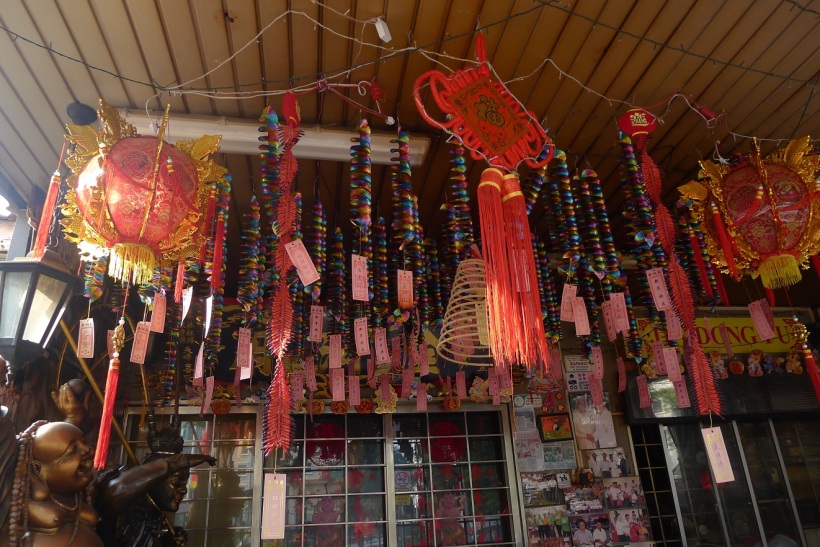 But my favourite is this piece of paper pasted on the glass of a barber shop which seemed to be run by a Buddhist society. Memorise this by heart please.